And classic interpretation of Shadow. I would love to see that.
Top

Locit wrote:Yeah, assuming the quality is maintained explain to me how letting more people buy your game is a bad thing. Do we even have anything approaching a release date for the Vita version? I don't think the Vita even comes out in the US until some time in 2012; it seems odd to expect them to rush out a port for a platform that isn't out yet.

Obviously in a perfect world everyone gets to play anything on everything anytime they want to. In the real world though, even a great developer can struggle with getting a game to run well on two sets of hardware. This is 4 pieces of hardware and no longer a great developer. Releasing on so many formats will have its price.
Top

Some serious Epic Mickey vibes from that last pic.

3DS version is looking considerably less balls than before. Here's a video! Hopefully it comes together completely by the time it releases. (Not that I'm going to have the hardware to play it until Nintendo releases their inevitable second gen 3DS.)

Re: that first pic. So does Shadow officially just fly now or what?
Top

Those are his jetpack shoe things! HIS SHOES HAVE AN INTERNAL COMBUSTION SYSTEM
Top

I want this game so effing bad. I'm actually excited to see Shadow again, knowing it takes place in the Adventure 2 timeline, back when the character didn't completely suck.
Top

Esrever wrote:3DS version is looking considerably less balls than before. Here's a video!

Looks about the same to me; Classic levels taken wholesale from their origin, bland use of scenery. Also, does Classic Sonic have a homing attack reticle in that clip?
Top

I'm thrilled that Sonic gets to walk on the grass in Planet Wisp.
Top

Really, K2J? I thought the 3DS version looked considerably improved visually! It's still a little vacuous, but there is definitely a lot more visual flare to the GHZ now. I'm not sure about how it'll play, though. I saw that thing with the reticule, too... that seems super odd.

As for the home version, I'm still kind of blown away that we're getting a whole second set of recreated environments just for the boss fights. I thought for sure they'd just drop the bosses into the main stages. They really are going the extra mile this time, at least in terms of presentation. I just hope they are putting as much of this unusual effort and polish into the level design and gameplay as they are into the aesthetics.
Top

I'm starting to look forward to this game more than I've looked forward to a Sonic game in a looooong time.
Top

Every recreated stage for this game hasn't disappointed me so far, but Space Colony ARK looks a little more blocky and neon-bright than I remember. The harvest moon in particular looks odd (is it even half-destroyed!?). The atmosphere conveyed by the ARK levels' graphics were perfect for SA2. But 'tis truly a less dark and angsty time for the series.

It looks as if Sonic Team has taken a mediocre and redundant set of levels (chosen by fans in some sort of poll, if I've got my sources right) and made them into something good. I so hope I can play this on my PC.
Top

K2J wrote:Looks about the same to me; Classic levels taken wholesale from their origin, bland use of scenery.

Green Hill actually has decoration now, though the textures still suck so bad when compared to Super Mario 3D Land that it makes the game look like an original DS title.

Trailer for the three "classic" stages, with a few fleeting glimpses of Sky Sanctuary:

The original Sky Sanctuary had a pretty sparse look to it, maybe just because it ran on an empty sky background. But it is looking pretty dense now! I guess someone built some extra ancient floating ruins. It looks good, though... just a lot less green. (Almost kind of Marble Gardens-y, colourwise.)

You can see the Death Egg looming in the background right near the end, when Sonic runs past the signpost.
Top

Not that I have too much love for the Zone (Death Egg's ascension stole the show in S&K) but that's not really the Sky Sanctuary I remember. Was it at anytime yellow when they were making it and it just looked butt, or what?
Top

Yeah, I'm heavily bugged by the fact that they just seem to have forgotten what colour Sky Sanctuary was. It looks nice (the parrots we can see at the signpost are a nice touch), but it doesn't look how it should to me.

The Modern version of the music sounds amazing though! It seems to really work with Senoue's style.
Top

I love sky sanctuary but it's a terrible level to try and convert to 3d. It is essentially a giant bottomless pit. hopefully there are giant islands that you can traverse as opposed to thin highways in the sky.
Top

It's Ocean Palace without water, with a bit of Rooftop Run thrown in. There goes my wildcard! Now I can truly say that there are only three distinct level tropes in this game. Really, I never thought I'd have to complain about a level being too green.
Top

I think the problem is that all that traditional greeny-yellow really needs a secondary colour to balance it.

In the original level, the contrasting colour was the blue of the sky. Which worked, because the ruins were extremely sparse... just a few floating blocks in a blue void. But from the 3D perspective, and especially with all the added levels ruins in the background, you don't see much sky. The screen is filled almost entirely with what, in the original game, would have all been almost entirely one colour. I can see why that wouldn't have looked very good, and why they would take the grey and beige stonework from fountains and towers and play them up a bit more.
Top

I can't be the only one who first thought of this, right?
Top

I'm getting the impression that the level designers weren't the ones who got to pick the levels they were making. They seem to have realised that translating the actual Sky Sanctuary into 3D was a bad idea and made something very different instead, which to be honest was what I was expecting all along.

A bit of a shame it's so thematically close to other zones in the game, though.
Top

You do get the impression they're trying to "make do" with a non-ideal list. Like how they've turned Spagonia into a festival, and Ocean Palace into an underwater stage.
Top

Well, I hope for a good game, Will I be disappointed?
Top 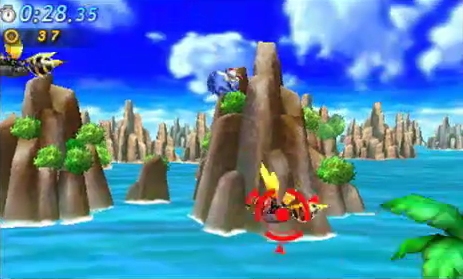 OH BOY, HOMING ATTACK! THIS WILL BE GREAT! I'm sure glad they hired Dimps to port this game.
Top
Post Reply
1176 posts