Rememer, it still are a sonic -game. A game we still buy.... Relax my friends!
Top

Neo wrote:Man, I just remembered Amy's vaginagrind from the first Advance. What was up with that?

It's not all her fault. Sonic just never wanted to hit that.
Top

"We’re excited to reveal one of the rivals you’ll be facing in Sonic Generations – Metal Sonic!"

You're just used to his post-Adventure lanky design. I like it! Really I do! There's just enough detail in his design that he's undeniably robotic, but not overly so--the artistic sensibility that made the classic era so endearing. Also round "irises" look so much better on Metal.
Top

Yeah, I guess that WAS how short he was in the actual game, wasn't he? 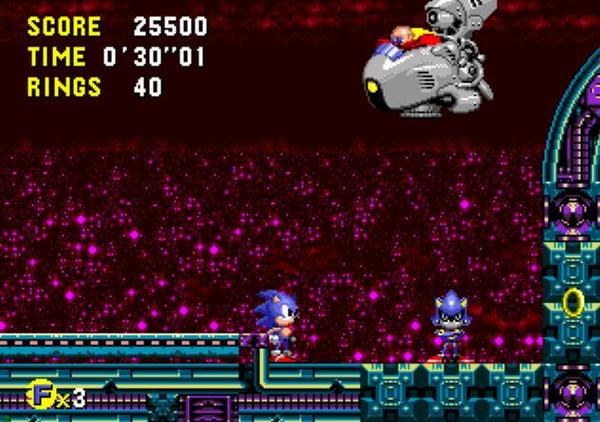 He did seem taller in the art at the time, but I suppose they've got to keep him to scale with classic Sonic.

(And I guess the angle of the new image is also exaggerating the shortness a bit.)

I wonder if there will be a "modern" Metal Sonic, too?
Top

The pic makes him look downright chibi. Not terribly intimidating. *snicker*
Still cool though, I guess? I was never a big Metal Sonic fan boy.
Top

Neither am I , but it does make me hopeful we'll see classic Knux, Tails and Amy rendered with such loving detail.
Top

Seems about right when compared to the style guide.

The one thing that consistently bothers me about modern Metal Sonic art is that they rarely draw his spikes as spikes. It's not even so much about artistic license - First4Figures' 2 inch figurine has pointy looking spines no matter what angle you view it from.

If I wanted to be pedantic I'd point out that Metal Sonic didn't get finger joints until Sonic Rivals 2 and Winter Olympics. Not that I mind - that was the one design update that really made sense!
Top

Famitsu published some pics of Chemical Plant! Also the Metal Sonic boss race... which, surprise, is in Stardust Speedway after all! So they aren't TOTALLY out of it.

I guess if all the art assets for Stardust Speedway are already done and on the disc, odds are high they'll release a proper level in the future as DLC.
Top

So, with Stardust Speedway recently confirmed, along with the Death Egg and Sky Sanctuary, I wonder if there will be a boss battle for every version of Metal Sonic? There's a Sonic Heroes level, who maybe Metal Overlord will be in too.

I hope they squeeze in a Sky Chase sequence during Sky Sanctuary. You can't have an Anniversary game without the Tornado.
Top

classic tails and knuckles better be in this shit. I have a dark feeling that they won't be.
Top

Jazwares are making action figures of Classic Tails and probably Classic Knuckles. They've already said that everything in their "Sonic Through Time" line is from Generations. Hope we manage to get Classic Chaotix, but I doubt it. =\
Top

With hat and sunglasses accessories or NO SALE. >:(
Top

Wasn't Death Egg confirmed to be in this game as a boss? If so, then it's likely to be the Sonic 2 version, meaning, Silver Sonic.

The Sky Sanctuary stage had you encountering Metal Sonic several times, so it only makes sense for him to appear at some point in that level.

We didn't know until recently that Stardust Speedway was in the game, so who knows? Metal Overlord and Sky Chase could show up too (Metal Overlord isn't exactly my favorite boss, but if we're getting several versions of Metal Sonic in this game, I say why not toss in Overlord too)
Top

cjmcray wrote:Wasn't Death Egg confirmed to be in this game as a boss? If so, then it's likely to be the Sonic 2 version, meaning, Silver Sonic.

That's cool, but what I was hoping for is that we battle the giant space state itself, perhaps by going through its interior like a regular stage and finding engines / generators to destroy. At the same time, the giant Eggman Mech or the one originating in Sonic 2 tries to hinder you, sometimes forcing Sonic to briefly battle it to move on and sometimes launching attacks from the background / foreground. If the player could dodge said attacks, they'd end up contributing to the damage dealt to the station.

Oh yeah, and hooray, a Sonic CD location is getting featured in the game. I would have preferred an entire stage, but the devs couldn't have picked a better representative given the established level / boss stage structure.
Top

Radrappy wrote:classic tails and knuckles better be in this shit. I have a dark feeling that they won't be.

Crazy Penguin wrote:Hope we manage to get Classic Chaotix, but I doubt it. =\

Looks like I'm not the only one who forgot about this post! In addition to the rival/boss battles we have co-op/vs missions involving Tails, Knuckles, Amy, Eggrobo, Espio, Vector, Charmy, Cream, Rouge, and Blaze. Eggrobo only appears in a classic stage, but the rest are in both classic and modern levels. We can hope that Sonic Team was feeling spendthrift when it came to character models. Classic versions of Cream, Rouge, and Blaze would be interesting to see.

The post also outlines the game's progression, and it's not separate for Classic and Modern Sonic, so we may see two versions of each boss/rival fight. Hope remains for a 3d race in Stardust Speedway! ...or a rematch with Metal Overload.
Top

I imagine the vs/co-op characters will be representative of their respective era. Tails, Kuckles and Amy are on Classic levels, Cream, Rouge and Espio are on Adventure levels and Blaze, Vector and Charmy are on Modern levels. So probably no classic Chaotix or classicised versions of newer characters.
Top

Lots of interesting screenshots of Metal & Stardust Speedway. Also of a certain other character with both Classic & Modern artwork who has finally showed up...
Top

It never occurred to me what a fucking ugly mess modern tails is until you put him next to classic tails.
Top

Chemical Plant Zone is looking a lot better than it did in those blurry screenshots from before! And I'm actually pretty excited to see classic Tails. Will there be classic 2-player co-op?
Top

Huh? Thought for sure classic tails would have his longer muzzle(could it be due to the angle?). Never noticed that his ankle belts were cyan before.
Top
Post Reply
1176 posts