So... so what are the differences?
Top

Probably that X-box has the best graphics, playstation sucks and gamecube has the perfect jump button.
Top 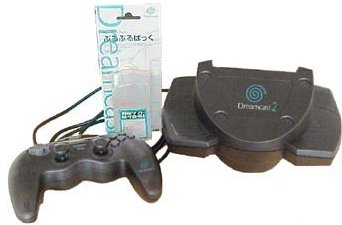 You silly goose, this is the real Dreamcast 2:

If the controllers aren't wireless, I'm not buying that.
Top

With all the electromagnetic interference big cities have, plus the huge amount of money you end wasting in batteries, I donÃ¢â‚¬â„¢t get why wireless controllers still exist.
Top

Probably because your brain suffers from interference due to lack of functioning cells.
Top

The Wavebird gives you cancer.
Top

Using the internet gives you cancer. I seemingly can't open a fucking window without cancer leaping out of the nearest tree and latching to my face.
Top

Being alive makes you a potential cancer victm.
Top

Dreamcast 2? Screw that, here's the Dreamcast 3!

What happened to SA3?
Top

What happened to SA3?

That's what you get when you mix and homoginize the best parts of Shadow, Rush, and Heroes while lopping off the crap, I guess. Which would make something BARELY decent.
Top

No it wouldn't, it would create some sort of horrible demon spawn shell of a game that devours whoever dares to play it. Even though I've heard good things about Rush.
Top

So... so what are the differences?

The PS2 version goes 30 FPS, has horrible slowdown, bad loading times, pixelation, and a general lack of polish (and twitchy controls). It's also the ONLY U.S. version to allow both Japanese language and English subtitles at the same time; with the X-BOX, you can have Japanese language, but you also get stuck with Japanese subtitles.

The Gamecube version is the most polished, and the only one suited to the controller layout. It goes 60 FPS, lhas ittle pixelation, and has the least slowdown. It also contains the dub only, but we already know that. It's the only version to contain an anti-flicker option.

The X-BOX version also runs 60 FPS, has Japanese (but unable to have Enlgish subtitles at the same time), and has the same pixelation problems as the PS2 version. The loading times inbetween levels is slightly shorter than the Gamecube, though the menu loading times are on par with the PS2 version's. Also, for some reason, music doesn't play in some of the menus. It's the only version of the game that allows you to adjust the brightness of the game's picture.
Top

Light Speed wrote:No it wouldn't, it would create some sort of horrible demon spawn shell of a game that devours whoever dares to play it.

So, Tails Doll is a playable character?
Top

Having sucked the souls out of every other eligible character, it's the ONLY playable left.
The entire game is Tails Doll staring back at you from the abyss.
Top

Actually, if you stare at the screen for long enough while playing Heroes, you will see Tails Doll's visage staring back at you.
Top

I don't doubt that.
Top

I haven't seen it myself but apparently the latest issue of Nintendo Power says that Cream and AiAi from Super Monkey Ball will be playable in Sonic Riders.

I don't know if it's true but it seems odd that they'd bring a character from another franchise into this. Still, I'd rather have AiAi than Shadow!
Top
Post Reply
63 posts