Speak your mind, or lack thereof. There may occasionally be on-topic discussions.
Post Reply
133 posts

The head isn't that bad. It's not great, but I think your general movie goer who only remembers Sonic from the nineties probably wouldn't see it as being too different from their memories of the game. The body, however, looks too naked to the point of it being off-putting.
Top

Sonic's irises and pupils seem way bigger than in that mock-up poster showing him relaxing in a police cruiser. That alone is making his finalized design more unnerving to me.
Top

His arms are blue...
Top

His hands are white! I thought they were just really thin gloves, but no, they really went there (the space between his eyes is white, too)!
Top

Huh... This movie seems like a bad idea.
Top

Whatever gave you that notion?
Top

It's kind of telling how we still haven't seen any officially-revealed promo material that fully shows how Sonic looks in this movie, while the Detective Pikachu guys take almost any chance to show off their realistic pokémon. It's quite a difference in perceived faith in the end result.
Top

Well, now we do: https://www.youtube.com/watch?v=FvvZaBf9QQI
Top

I actually... don't think Sonic had a bad portrayal in the trailer. His nose is as distracting as fuck though.

That said, Jim Carrey as Eggman is just not working for me. He seems to be portraying a Jim Carrey bit character, and not really Eggman. He's honestly a bit annoying.
Top

The Sonic model does look a bit better in motion, but not a fan of his new voice. He sounds far too old. And what was up with him growing rings to use as portals at 1:59?

Jim Carrey looks okay. Judging from the end of the trailer, which shows him in a desert, I guess he'll slowly look more and more like the traditional Eggman we all know and love as the movie goes on.
Top

It's perfect. That trailer was perfect to me, like a flawless diamond or the melody of a young dove.

Sometimes, I read over old posts from this forum, like from around 2004, and see how hopeful everyone is for the future of this franchise. And then, I just scream and scream.
Top

So this turned out..... to not really be what I expected at all?
And I still am not sure what really to expect going forward.

Sonic certainly does not look as bad in motion as I was thinking, and I mean that literally. His head and face could be much worse, except in stills and then not so much, and his body is still too Cats! for what I would have preferred, but during any kind of movement the effect seems noticeably lessened. Also nothing about Sonic's personality annoyed me, which is more than can be said for detective pikachu, a movie that looks better, but that since trailer one has annoyed me more and more.

Not a single fart joke; may it stay as such.

Jim carrey with hair is as stated annoying, though I found the "No, but thanks for asking" line to ring true to character, enough so that I hear it in bistrow/pollock's voice in my head as opposed to carrey's when thinking about it; and I missed the very last bit of the trailer where he gets to looking properly eggman ( and appears to be at mushroom hill?) the first watch through, so I was more concerned about carrey than Sonic to begin with.

So will Sonic be from mobius? will they go back to mobius? Will this movie only partially take place on earth? I am tentatively something about all this, that is for sure.
Top

I can't help but smile and feel a little excited. Probably for all the wrong reasons. At least once this movie comes out we can all forget about another Sonic movie for a very ling time.
Top

This doesn't look as bad as I expected but it really doesn't look good either. Sonic... doesn't look too bad in motion but that design just looks odd at best and downright ugly at worst. It's hard to believe that was the best they could come up with. Jim Carrey just seems to be playing 90s era Jim Carrey. If it wasn't for those last few seconds and knowing about the casting beforehand I would have just assumed he was playing an original character rather than Eggman(or Robotnik I guess as they seem to be going with that name in this film). Gangster's Paradise is also a really strange choice of song for this trailer. It really doesn't fit. Beyond that, this just looks like a really generic "CGI character goes for an adventure in the real world with a human buddy" type films. Those sort of movies rarely turn out well and I can't see this being an exception. That said, I can't I'm particularly outraged or anything like some fans seem to be. This never sounded like a good idea to me and it would hardly be the first franchise to get a poor movie spin off.
Top 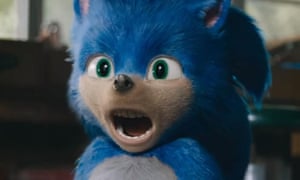 Anyone remember that CGI Cat in the Hat movie? Or CGI Grinch? That's what this face reminds me of.

This is a Reddit leak from March. It predicted much of what appears in the trailer, so my money's on it being true. Spoils more or less the entire plot. Looks like it's pretty much the typical kid-friendly comedy I was expecting, probably with some Sonic memes thrown in.

Sonic's origins: Sonic escapes his birth planet as a baby (rings are how Sonic got to Earth. He can throw one and imagine a place and it will take him there), is found by an owl and grows up on Earth. Ends up alone after some time and grows up staying hidden. He pretty much scavenges and lives in the shadows. He is known as "the blue devil" to the locals and thought of as an urban legend until he is found out about. Loneliness gets to him which leads to the government bringing in Robotnik to find the energy disturbance caused by Sonic. (Sonic makes an electrically charged run when he focuses or gets extremely emotional. His charged run is why he gets detected and how doc comes into the film.) Hijinks ensue and a good story is told as Tom the cop and Sonic become besties.

How Sonic and Tom meet: Tom has raccoon problems in his trash. When he goes to deal with it, he sees Sonic face to face for the first time. He tranqs him and puts him in a cage. Robotnik shows up, but they escape and Tom begrudgingly agrees to help Sonic. Sonic has to go to San Francisco because he activated his ring portal power and dropped the bag of rings into it, dumping them on top of the Golden Gate Bridge (donuts may also be involved? The wording on that detail was a bit confusing). Tom drives him there because he is moving to San Francisco to prove to himself that he can handle real cop crime and not Montana small world problems. Tika Sumpter plays Tom's wife Annie. She's a veterinarian and since she was known to Sonic when he watched them from afar as being kind to animals, he felt he could trust them both.

Eggman’s role: Robotnik (who is never referred to as Eggman) is just a psycho doc that works for the government initially. He has drones that can track and shoot, as well as a large tank. He's super obnoxiously smart and makes tons of comments in the film about how superior his brain is. Has the typical long coat and all dark evil scientist look, short mustache as well initially. He gradually gets crazier and more obsessed with Sonic as the film goes, and doesn’t rock the signature look until tail end of movie, when he is defeated and ends up on a foreign planet that Sonic was supposed to escape to in the event of being found on earth. He is now hefty and rocking the full blown 'stache.

Misc Extras: There is one major car chase scene/battle. Sonic flosses (the dance move) afterwards. In another scene, Sonic creates an Earth bucket list after Tom agrees to help him get his rings back. Sonic sneaks off while Tom makes a phone call in a backwoods gas station. Sonic creates a ruckus and a bar fight ensues.

Other Sonic characters in the movie: None. It's just Sonic and Eggman.
Top

Well, not what I would have hoped for if it is all true, but certainly not offensive* ( considering this is all we have to work with, and barring the finer details are not upsetting) potentially pretty bland but not offensive. And whether by design or by chance I feel like the idea of rings being warp rings, in potential nod to the dimension rings/spcial stage rings is a good one. Rings are the staple that seem to me to be the hardest to work in well, and this seems a good choice.


*YMMV; I like to be positive about things.
Top

So apparently Paramount *finally* realized that people actually like it when the appearance of a video game character looks like it's supposed to. Jury's still out on whether or not they make any noticable positive changes, though; they already claimed the earlier leaks weren't Sonic's final design, and all they did since then and now was...give him socks and change his sneakers?
Top

Aannndd Naka is apologising for how Sonic looks

He is also bummed he was forgotten about; I hold Paramount (for much more than this) in rather low regard.
Top

So the movie got delayed to February 2020. I suppose this was inevitable, given the circumstances.
Top

Yami CJMErl wrote:So the movie got delayed to February 2020. I suppose this was inevitable, given the circumstances.

I'm shocked they just didn't release this movie on schedule and took the hit.
Top 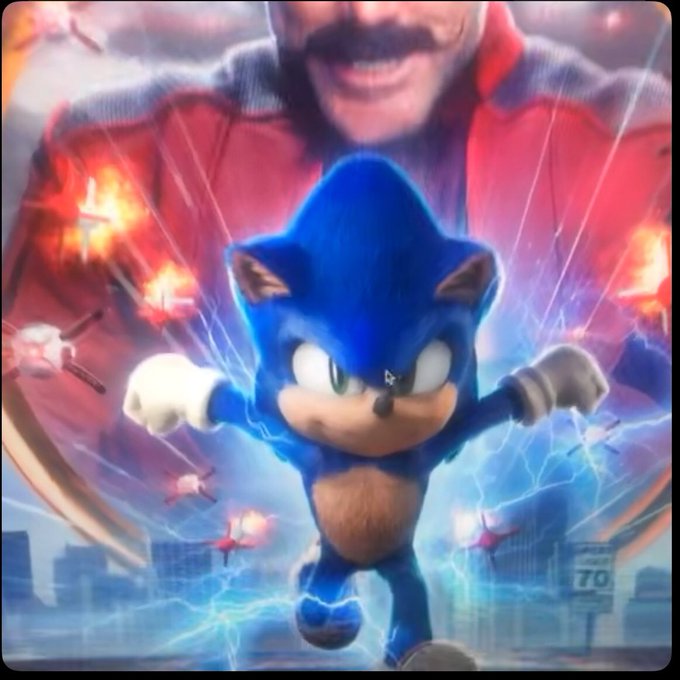 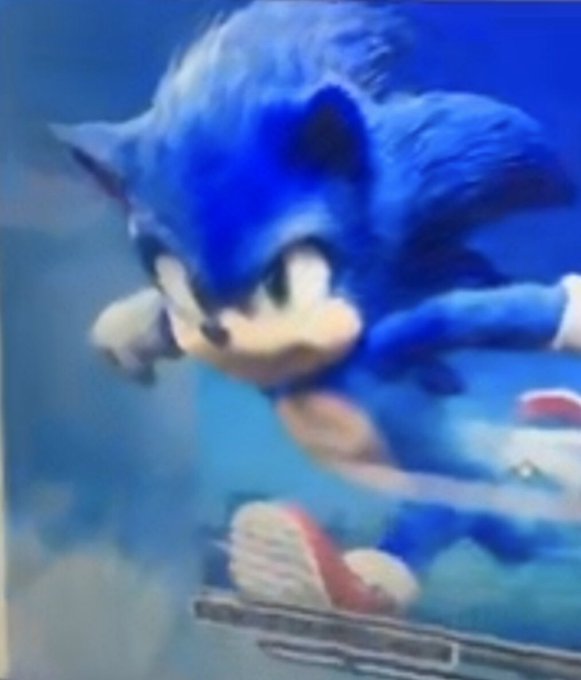 Still wish they changed his arms back to peach while they were at it. Oh well.
Top
Post Reply
133 posts