Speak your mind, or lack thereof. There may occasionally be on-topic discussions.
Post Reply
42 posts


Sonic is back, and ready to take 2018 by storm. Join the official team from SEGA who are building Sonic’s future as they give you an update on last year’s strong performance of Sonic Mania and Sonic Forces, as well as the world-exclusive first look at what comes next for the fastest blue hedgehog. Speakers include Sonic Team head Takashi Iizuka, Sonic PD Director Austin Keys, Sonic Mania Animation Director Tyson Hesse, and Sonic Social Media Manager Aaron Webber. You won’t want to miss this!

It seems way too soon for another Sonic game. There's been rumours floating about an enhanced version of Sonic Mania, so hopefully it's something small like that.
Top

The development cycle for Sonic Forces was supposedly 4 years. But if they have a new big flagship Sonic game that's ready to be teased at this point, I wonder if Sonic Team didn't write off Forces as a lost cause at some point, and just pumped it out as quickly as possible so they could quietly get a fresh start with a new project.
Top

There was that time they did Sonic Colours and Sonic Generations immediately after. Apparently they split into two teams to do this (but I've never seen any evidence of that as there's a lot of shared personnel in the credits).

It's strange: Subsequent games have had longer development schedules and ended up worse. And during Colours/Generations they were also supervising the DS ports and Sonic 4. Perhaps Sonic Team work better with tighter deadlines.
Top

big_smile wrote:There was that time they did Sonic Colours and Sonic Generations immediately after. Apparently they split into two teams to do this (but I've never seen any evidence of that as there's a lot of shared personnel in the credits).

If I'm not mistaken, the Colors crew was largely composed of the people that split from the rest of Sonic Team to make the two Storybook games. I guess you can kind of see that in Secret Rings, Black Knight and Colors all having a form of Red Star Ring (which originated as Fire Souls in Secret Rings, but otherwise have remained largely unchanged), before being incorporated into the rest of the series in Generations.
Top

I'm surprised it hasn't already been posted but there's a fairy strong rumour going around that Sumo are working on another Sonic Kart racing game. However, it's been suggested that this one will be focused purely on the Sonic franchise rather than another All-Stars game. Sumo did a great job with the other games and they were a lot of fun to play but a big part of the appeal for me was seeing the various Sega characters and franchises make an appearance. Take that away and I can't see myself being as interested. I guess we'll just have to wait and see what comes of this one.
Top

Aaron Webber said on the official Sega twitter that the rumours are incorrect and no such game is in development. Although since then, two Sonic toy makers have said they are making products based on a Sonic racing game, so perhaps he was just covering.

I am in the minority as I didn't like the Sumo games. Sonic R and Sonic Riders were neat, because they added a unique take on the racing genre and managed to work in exploration elements. The Sumo games, however, stayed closer to racing game trends and so I found them to be quite bland and generic. I know that's unfair of me, because they were trying to be closer to proper racing games, but that's a genre that's never really interested me. And I still can't get over the idea of Sonic being in a car.

Apparently in the early prototypes Sonic was on foot, but Sumo didn't like the way he controlled, so there's probably no chances of this new game being a Sonic R follow up.
Top

They could stick him in one of those plastic foot-powered pretend cars. Have Roger Craig Smith make "VROOM! NYEOW! SCREECH!" noises.
Top

Sonic Mania Plus. Now with added Ray and Mighty

I never expected to see Ray of all characters playable again.

Looks like the racing game is more or less confirmed as well.
Top

I'm so over physical media, but I might have to pick up physical Mania Plus for the art book (Hopefully, they'll release a digital artbook). I'd never thought I'd see Ray and Mighty again, especially not playable. Iizuka mentioned Mighty in that interview long before Mania's release, so they must have been planning this for a while. The Encore mode sounds very interesting.

The racing game has the R from Sonic R, but then it uses cars, which is an insult to that great title.
Top

There's also going to be a new Youtube Mania Adventures series, using the art team from the game. Here's a sneak peak:
https://www.youtube.com/watch?v=T2uyIBURMjs

It's pretty awesome for Sega to do this as a free YouTube series. (Although I'd much prefer it as an unlockable for collecting the gold medals in Mania).
Top

As someone who much prefers physical media, I am stoked about all this. Likewise I haven't bought sneakers in forever, maybe this will be the moment*; if I'm gonna sell some organs to finance overly priced sneakers, this is as good a cause as any, especially since I missed out on soap shoes.

*if hell were to freeze over; these are gonna cost like what? A months grocery budget?
Top

big_smile wrote: The racing game has the R from Sonic R, but then it uses cars, which is an insult to that great title.

Seriously though, I could do with another Sonic racing game, especially one modelled after R. I'm really not a fan of the genre in general, but I enjoyed R's the atmosphere and level design in a way that I haven't with any other Sonic game. The Balloon mode was great for really getting into all the little nooks and crannies of the stages, and reminded me of Mario 64 in the nicest way possible.
Top

Ray's shoes are a slightly tweaked version of the ones he wore in the Archie comic series, from Sonic Universe #48 (Jan 2013) onwards.
Top

Hehe, with those new shoes Ray reminds me of this. Wonder if that was a conscious inspiration.
Top

I'm glad they dropped the red of Ray's shoes, because it clashed too much with his skin. But I wish they had kept the design of Mighty's shoes to keep a link between the characters.
Top

Am I missing something? Those are his Chaotix shoes. Do you mean what Archie gave him (which I cannot recall without a google search for what that's worth.)?

And "clash"? It was the same color scheme Tails has. I'm sure the motive was to better differentiate them. Not to mention that blue and yellow are photo opposites.

Not to suggest usage of complementary colors is undesirable, however. One thing I've found curiously odd about Tails and Knuckles is that they're dominated by warm colors, with their respective cyan anklets and green socks being the only splashes of cool colors. Yet obviously they work. Even their SA redesigns adding cool-colored irises were largely extraneous. Though there might be something to be said about Amy loosing all her cool colors save for her new eyes...

The imbalance has always been part of Eggman's design, but given that he's a loony villain I'm sure it's intentional. It is kinda genius that he shares the exact same palette as Sonic, but the cool blue is concentrated entirely in his tiny pince-nez.
Top

Sorry, I phrased my last post poorly. I meant I wished they had kept the style of Mighty's shoes for Ray (e.g. with 1 stripe), but just changed the colour to blue.

For me, Classic Tails colour scheme worked better as the red of his shoes didn't stand out much when placed next to his orange fur. Plus his shoes were half white.
Top

To be fair, it's really hard to pair either blue or red with yellow without having the complete trifecta, or at least some other color break up the other two. This is especially true, for me at least, for the bright, almost neon shade of yellow Ray has. Adding in his muted, tan-colored muzzle and belly is really the thing that makes his Mania design come together as nicely as it does.
Top

big_smile wrote:Sorry, I phrased my last post poorly. I meant I wished they had kept the style of Mighty's shoes for Ray (e.g. with 1 stripe), but just changed the colour to blue.

For me, Classic Tails colour scheme worked better as the red of his shoes didn't stand out much when placed next to his orange fur. Plus his shoes were half white.

Note that Mighty has his Chaotix era shoes... and Ray's match!

(He was also quick to point out that both Mighty and Ray were designed by Manabu Kusunoki, specifically for the arcade game.)
Top

He also points out that Sharps is in fact Max (and also not a chicken which we already knew.) So does this make Max the Monkey in fact Sharps the Monkey? Mach the Monkey perhaps?

Also, Max's redesign is much much better than his Archie design.
Top

Dr. BUGMAN wrote:He also points out that Sharps is in fact Max (and also not a chicken which we already knew.) So does this make Max the Monkey in fact Sharps the Monkey? Mach the Monkey perhaps?

It could have been an intentional name change. Since the monkey wasn't being used, there was no harm in stealing his name.

Naoto Ohshima attached the same names to each character in his interview for Sega Mega Drive/Genesis: Collected Works. This is the interview where he gave their animal names, including "Sharps the Parakeet". (The image in BEEP! didn't specify their species.)

In the Twitter image, the bird is identified as "Max" and Ohshima says that he is a parrot. A parakeet is a type of parrot, so is something getting lost in translation? Is he just a parrot in general, or specifically a parakeet? He's also more of a throwback to his earlier incarnation, one of the many mascot candidates. 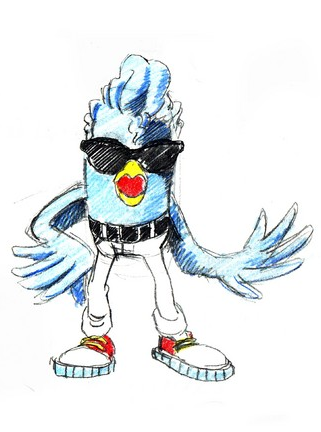 I'm very curious about the intended colour scheme. In the BEEP! image, Sharps is clearly coloured like a chicken. Was this truly the intended colour scheme at that time? Was Sharps really a chicken at one point? In one of the rare "holiday scene" illustrations, Sharps is yellow with green "hair". In those same images Max is purple, Mach is blue and Vector has a yellow underbelly (which became official with Chaotix). But, Flicky, Pecky, Rocky and Pocky are all miscoloured in these, so maybe these colour schemes should be taken with a big grain of salt. https://imgur.com/a/W67Vd

And that's without even getting into the question of what "Max the Parrot" and the rest of this motley crew were going to be used for!
Top

Well, cockatoos are a type of parrot and generally white with large flamboyant crests. But we're talking Sonic here, where color-accuracy was shot dead at the starting line.

Maybe Ohshima was looking for any animals typically found in pet shops for the Sonic Band... Some "Pet Shop Boys" if you will...


So that picture Ohshima posted.... Were Ray, Mighty, Vector, Max and Sonic going to be an alternative version of the Sonic band? Oshima mentioned that Manabu Kusunoki specifically made Ray and Mighty for the Arcade game, so was there supposed to be another project with the new band?
Top
Post Reply
42 posts