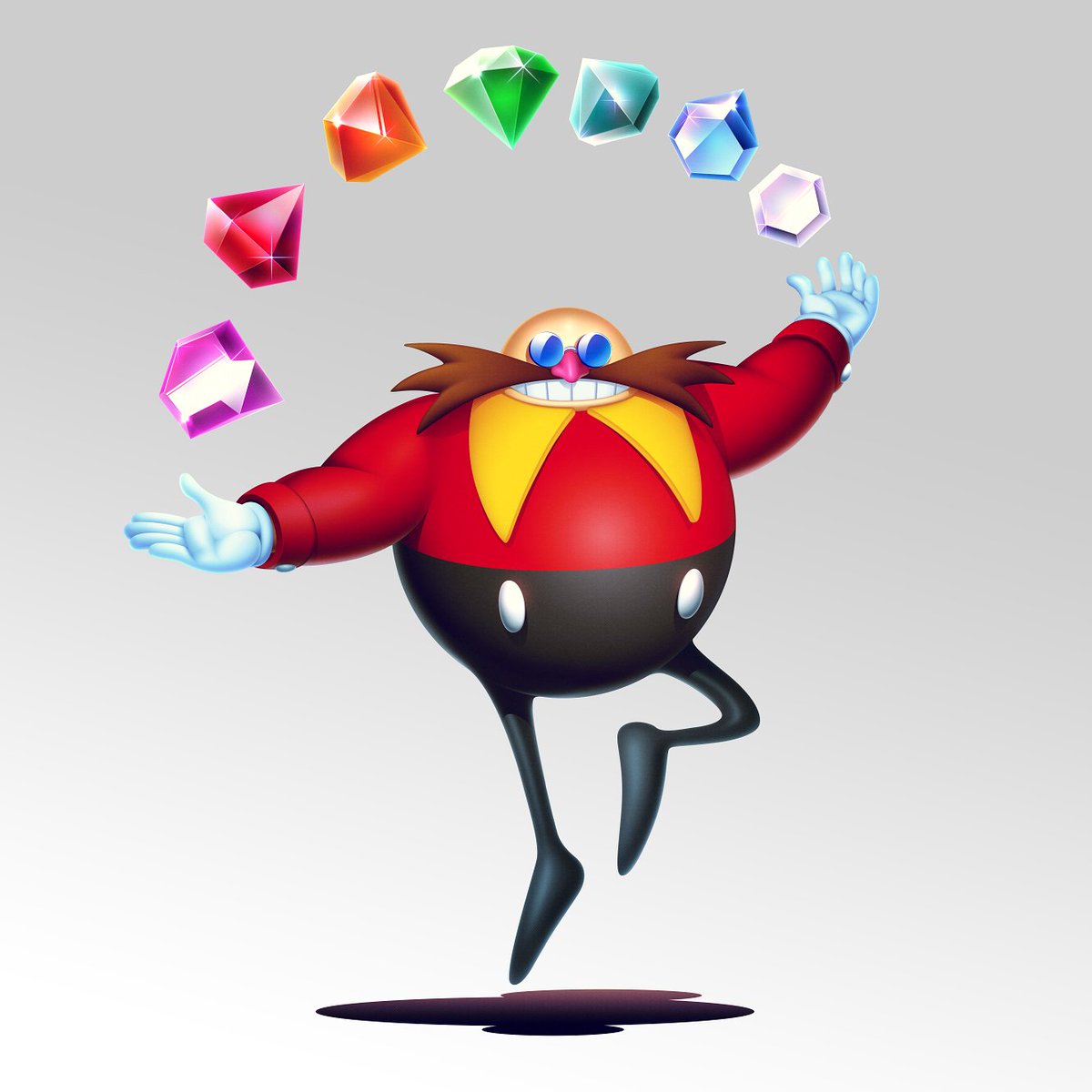 Y'mean this? I was meaning to cross-reference it with other emeralds' designs but found myself watching that trailer on loop instead haha.

They seem to be the set found exclusively in 3&K.

Also: what if the elevator in the trailer isn't metaphorical but the narrative conceit that links all these disparate locations. Like maybe Eggman has built a Westworld style resort and these are just simulations?
Top

That's an idea. The Hard Boiled Heavies themselves seem to pretty much be an extension of the themed Egg Pawns of Eggman's amusement park in Colors.

Also, this is incredibly nerdy, but I think the only reason the elevator didn't have a dedicated Sonic CD button is because SEGA can't decide if that game took place before Sonic 2 or after Sonic 3 & Knuckles.
Top

Dr. BUGMAN wrote:They seem to be the set found exclusively in 3&K.

No, these have a hexagonal top, whereas the ones from Sonic 1, 3&K, if we assume we're looking at a diamond-shape from the top down, are definitely octagonal. The only way they could arguably be hexagonal is if we're looking at them from an isometric angle, in which case they're round and not diamond (ironically, the typical diamond-shape is actually called round cut). To me, the tops of the super emeralds look pentagonal, so these really only match the Sonic 2 emeralds. Unless you mean the mini-emeralds that drop at the beginning of Sonic 3.

The Adventure emeralds are 100% octagonal on top,[*][*] so this is kind of an odd choice. I appreciate the effort, though.
Top

er, I was focusing on the colors alone. 3&K are the only ones that fit chromatically, I should've said!
Top

I wonder how they will handle Metal Sonic. It'd be odd to bring back Stardust Speedway without the robotic doppelganger. But I think this is supposed to take place before Sonic 4 which shows how Metal came back to life after Sonic CD. (The again, Chaotix also showed how Metal was revived, so I guess it wouldn't be too odd having a third game which shows his resurrection after Sonic CD).

Yeah, I noticed that too. What a subtle simultaneous fuck-you and reassurance.

big_smile wrote:I wonder how they will handle Metal Sonic. It'd be odd to bring back Stardust Speedway without the robotic doppelganger. But I think this is supposed to take place before Sonic 4 which shows how Metal came back to life after Sonic CD. (The again, Chaotix also showed how Metal was revived, so I guess it wouldn't be too odd having a third game which shows his resurrection after Sonic CD).

I guess one could argue that Chaotix takes place after Sonic 4, and that although he was destroyed at the end of Episode II at least his remains weren't stranded in another dimension this time.

As for how Metal Sonic works into Mania's CD stage, I'm guessing Act 1 will take place in the past, Act 2 in the present, and the boss portion of Act 2 suddenly taking place in the future with a Metal Sonic race.

How many full-fledged individual zones do you think Mania is going to have? Since we have three retro zones confirmed so far, I think the minimum is going to be 7 (I'd be really surprised if there's no Sonic 2 representative, and apparently a screenshoot of a third original zone was accidently leaked) and at maximum 9 (if Sonic 3 is considered a separate thing and gets a zone, which the new trailer would seem to indicate, plus another original zone to balance new and old content out a bit more. Admittedly that last bit is little more than wishful thinking at this point).
Top

Dr. BUGMAN wrote:er, I was focusing on the colors alone. 3&K are the only ones that fit chromatically, I should've said!

Oh, wow, the orange emerald is back? Now that really IS odd. And unlike when Sonic Team uses random colors, I don't think Taxman's team could possibly have done this unintentionally. I wonder if they're going to try to explain the second set of emeralds mentioned in the S&K manual.
Top

That Chaos Emerald picture kind of bugs me way more than it should!

The Chaos Emeralds were wildly inconsistent in the early days, until Sonic Team established a fixed design and colour set with Sonic Adventure. I always appreciated how they went about formalising the Chaos Emeralds - they had the Super Emerald shape, viewed from above they were octagonal like in Sonic 1, they used the original colours from Sonic 1 and added sky blue as the seventh.

It's weird that they would suddenly change it after 19 years of consistency!

Sonic R has an internal inconsistency.

In the end credits there's a sky blue Chaos Emerald in place of the orange one. It makes me wonder if Sonic Team themselves produced that image, since it's the exact same colour scheme used in Sonic Adventure.

(The blue emerald situation is a bit weird as well. In-game Resort Island's emerald is a dark blue, in the "You Got Chaos Emerald(s)" screen it's sky blue, in the file select it's dark blue again.)
Top

Speaking of R, anyone ever notice that the white* emerald is disgorged by a yellow submarine?

As for inconsistency, the models used as official art R are not the same that are used in game. Knuckles wearing Tails' shoes tipped me off and I bugs the hell out of me.

*Silver according to G Sonic.
Top

All of this is a little too pedantic for me to care. No offense directed at anyone or anything.
Top

Malchik wrote:All of this is a little too pedantic for me to care. No offense directed at anyone or anything.

Hey, did you notice that spreadsheet lists both pink and purple in the same column?
Top

There's an odd little detail to the "Blue Spheres" Chaos Emeralds that isn't mentioned on the chart.

In Sonic 3 stand-alone, the second emerald is yellow. Orange is the unused one.

In Sonic & Knuckles and Sonic 3 Knuckles the second Chaos Emerald is orange. Yellow is the unused one.

Here the emeralds are in their modern shape but the colours match Sonic 1 exactly.

Same colours as above, but with a sky blue added. So the same as in Sonic Adventure and Sonic R's credits. The second emerald is actually purple within Sonic 2 itself, but is dark blue here.

SON OF A BITCH THE SECOND EMERALD IS ORANGE. Even though the second Special Stage is pulled from S3 standalone and not S3&K, so the Chaos Emerald is still yellow in-game.

Why did they go to the effort of programming in 8 Chaos Emerald colours? Apparently someone cared enough that Sonic 3 & Knuckles had an orange emerald and not a yellow emerald, but didn't care to check Sonic 3 stand alone. But they didn't care about Sonic 2's purple emerald. Weird!

Still orange. I didn't bother getting the last 5.


Dr. BUGMAN wrote:As for inconsistency, the models used as official art R are not the same that are used in game. Knuckles wearing Tails' shoes tipped me off and I bugs the hell out of me.

Knuckles' shoes! There was that European promo art that had the green and yellow reversed, that carried over into Sonic the Comic. Then the Sonic OVA had the red and yellow parts reversed! And the tops of his shoes were blue instead of green in Sonic 3D Saturn (the sprite anyway, the 3D model was correct).
Top

Crazy Penguin wrote:There's an odd little detail to the "Blue Spheres" Chaos Emeralds that isn't mentioned on the chart.

In Sonic 3 stand-alone, the second emerald is yellow. Orange is the unused one.

Ok, that IS worth fixing. Might as well fix Sonic R and grab screenshots of the Adventure games while I'm at it. Damn thing's been unfinished for over a decade now.

Any other nitpicks that don't involve my subjective color groupings?
Top

Maybe add a screenshot of Adventure's emerald directly facing it's upper cut. Also, add some pictures of the physical emeralds from Heroes. If I recall correctly, you actually get a pretty good profile shot of Heroes's in-game emeralds (they're pointier than the specially-created image above, iirc) immediately after obtaining them in special stages. I'll try to capture a good shot of one later on, there aren't any good still pictures of them on Google Search as far as I can tell.
Top

There's the nifty red, purple and cyan emerald sprites in Rouge's HUD for Security Hall in Adventure 2. It'd be convenient if the Spriters' Resource had 'em, so of course they don't. But hey here's the the textures for the actual models (derp)!
Top

Oh, wait, I just remembered there are sprites for all 7 in SA2 on the monitor in this scene. (SR doesn't have that, either.)
Top This was pretty much my best find tonight, a fairly good depiction of the in-game Heroes emerald profile. It's more detailed than I remember, and it doesn't appear to be truly transparent, but highlights certain edges along its polygons to emulate a degree of transparency. The emerald shares roughly the same proportions as SA2's emeralds, as opposed to SA1's emeralds, which were relatively squat in terms of height. ...And this was my greatest disappointment. I wanted to capture a decent shot of the emeralds rotating around Sonic, Knux, and Tails in the cutscene before Metal Overlord in Heroes, mainly so we could get a good look at them from the top. Unfortunately, this was the best I could do. The emeralds were probably standardized by this point, so I imagine that they're essentially the same as the SA2 emeralds in terms of cuts and general proportions, but there's no way to prove it looking at this.

For completion's sake, I also took a couple of screen captures of the "drained" emeralds of SA1. Here you can better see what I mean when I say that the SA1 emeralds were "squat". And here's a slightly worse shot with the emeralds' outlines obscured by hands, the background colors, and each other. The only notable thing here is that the drained emeralds are clearly transparent, which I am fairly confident is not true of SA1's regular-schmegular textured Chaos Emeralds.

One more thing - I thought for the longest time that the "drained" emeralds in Unleashed differed from those of SA1 in that they still retained their original colors, but were just really, really dulled. Looking back at the Unleashed opening cutscene, it doesn't appear as if this was really the case. Watching further along until we see the actual in-game emeralds (after Sonic crashes into Apotos) seems to confirm that the drained emeralds don't actually have color. If they do, the differences are too minor for me to notice.
Top 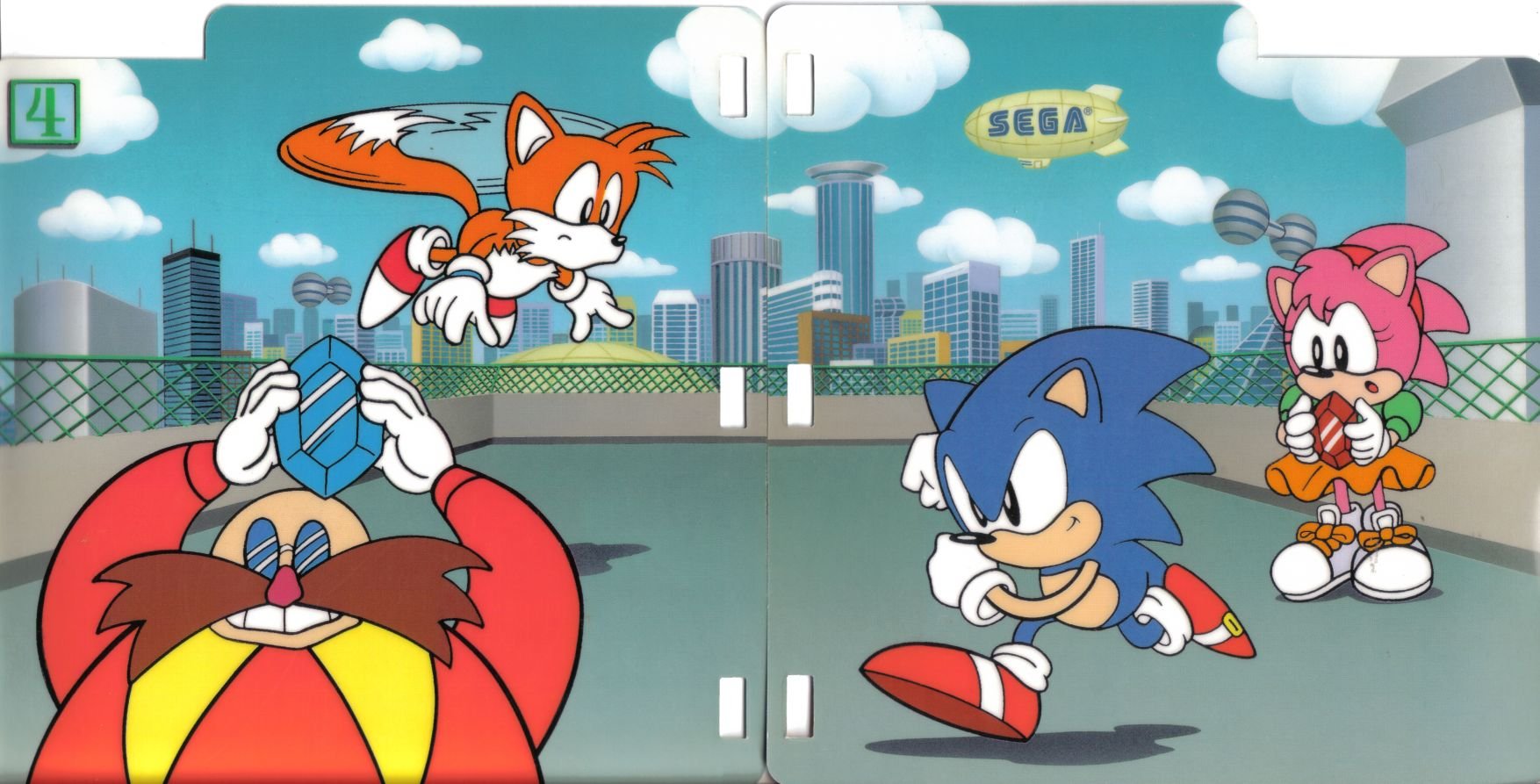 I'm sure they're in game too, but can't find any relevant screenshots. Anyway they appear to be the Time Stones under a different name, as they both have the rupee-like shape.
Top

Thanks Wombat! I've also recruited someone to go through Tails's story in SA1 and grab good shots of the emeralds around the shrine in the past, so I think we'll be good on those games.

The Gameworld sprites are already on the chart.
Top

Didn't Pocket Adventure use both shape types? I think they were diamond shape in the special stages but cough drop shape in the cut scenes.
Top

big_smile wrote:Didn't Pocket Adventure use both shape types? I think they were diamond shape in the special stages but cough drop shape in the cut scenes.

Other way around, they're hex in the tube like Sonic 2 but resized Super Emeralds in cutscenes.

Also what the fuck happened to this thread
Top

You're all forgetting the most important set.