Dr. BUGMAN wrote: My preffered official Samus is this one (with a few provisos. Chiefly: jorts): You asked for it.
Top

I still think it's dumb to make a separate character out of an outfit that is not meant to be fought in. But if the plan is to give all the characters alternate skins based on famous costumes, regardless of how silly or impractical, these are probably as logical a choice for Samus as any. I do, however, now fully expect Twilight Princess Sumo Link for balance.

I hope regular Samus gets some of the Prime armor variations.
Top

Jingles wrote:You asked for it.

You joke, but I feel it's necessary (since you've robbed my post of some context) to point out that THAT'S ABSOLUTELY NOT WHAT I MEANT.

Sometimes I think unintentionally invoke the powers of a wise-ass genie.

ADDENDUM: "Her female designer"? Is this a translation error or a rationalization?
Top

Esrever wrote:I hope regular Samus gets some of the Prime armor variations.

Brawl gave Samus a Dark Suit (Prime 2) colorscheme, and an earlier screenshot confirmed that there's also going to be a Light Suit (Prime 2 again) colorscheme for her now too. If they decide to give her an alternate MODEL (a la Little Mac / RObin / Wii Fit Trainer), the obvious choice would be the original Power Suit (without the giant shoulders), though I would personally like to see the PED Suit from Prime 3.
Top

I'd rather see the Fusion suit get its own model, if only because I prefer the 2D Metroids to the Prime series. I'd love to see more alternate costumes in general, there are a lot of obvious ones to go for, like Dry Bones Bowser or Funky Kong. We already know that Train Conductor Link is removed from the Spirit Tracks stage when a player is using Toon Link, so maybe that's in as an alternate costume too.
Top

Smash 3DS comes out in Japan in a couple weeks, and there's billboards all over the place advertising it. They're really neat! 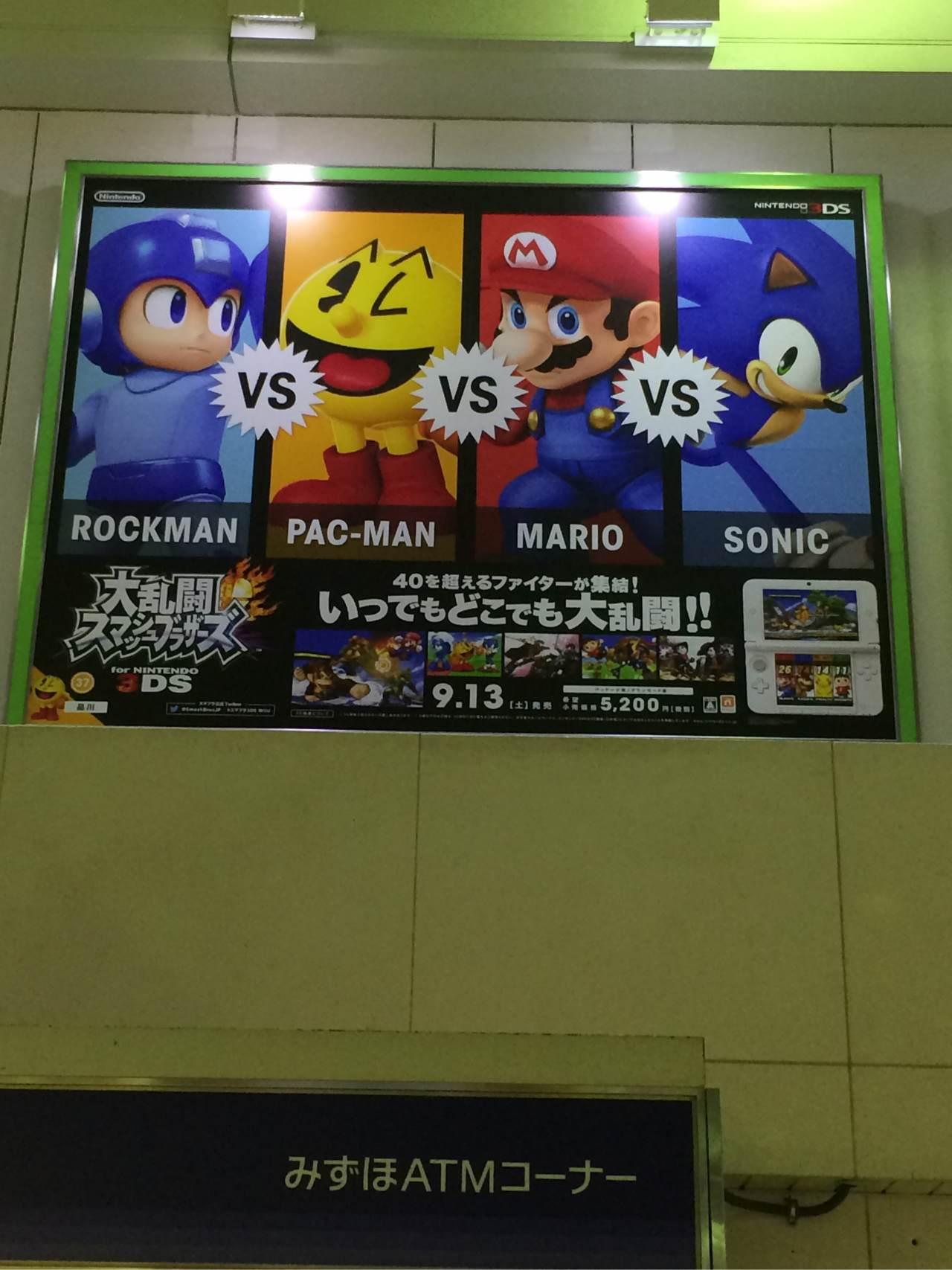 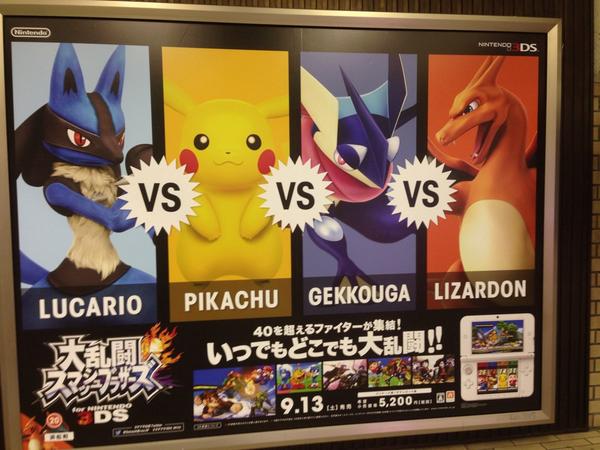 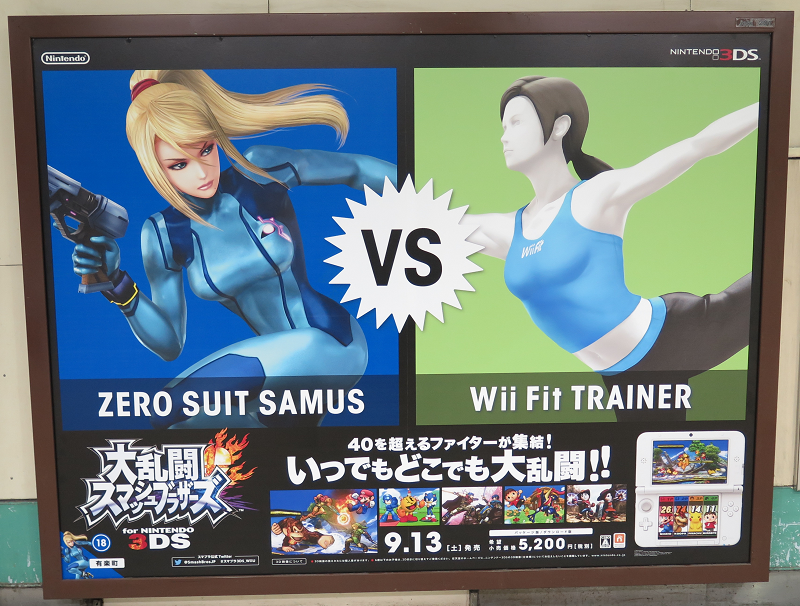 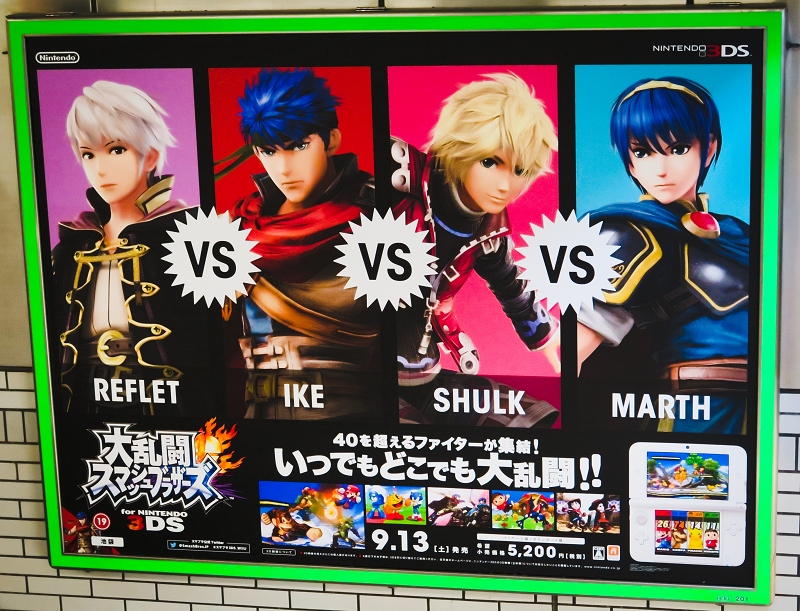 Not that this one has been a spoiler for weeks, but:

The prophecy has come true. Thirty years of pent-up vengeance against this mutt came to fruition.

I don't think he is so much "named" Duck Hunt as he represents the "concept" of Duck Hunt.
Top

His smash attacks involve cowering on the ground while an off-screen Zapper shoots in his general direction, and his Final Smash knocks opponents straight into a Wild Gunman shoot-off, so yeah.
Top

This is the only real thing I take issue with. I mean, I get why it's like that (he basically represents the Zapper and related games, not unlike R.O.B. represents the NES hardware), but I think it would have been better served with him jumping into a pop-up field of grass, and a bunch of 8-bit ducks swarming the stage.
Top

But one of his specials is also based off Wild Gunman. He's a pastiche of Nintendo's light gun experiments, and he's better off for it. Kind of like the Villager having the balloons from Balloon Fight.
Top

A demo just went went up earlier today in the American and European 3DS eShops. It has unlimited uses, solo and local versus play with five characters and one stage (with For Fun/For Glory rules).

I still have three surplus codes, so if any of our European GHZ brethren (do we have any?) want in and don't have a Club Nintendo account, feel free to drop me a line and I'll PM the download code.
Top

Wonder of wonders I was able to get a code from one of my friends. Anyone else have it and have any thoughts or impression. My initial thought is that the controls are pretty goddamn awful. I'm almost positive. the game is giving me carpal tunnel.
Top

I got the common demo, and played it a few times. I didn't feel any problems with the controls (but then again, I didn't get to play for too long each time); overall I thought it was pretty fun, and I do appreciate the opportunity to get used to the control scheme and the two new characters available.

With the game coming out next friday, I've noticed we never really did any 3DS FC sharing (or at least, I don't remember it). So unless it's better to create a new topic for it, this seems like as good a place as any to get new codes for everyone.

You know, this is the kind of shitposting that would really rile GG! up.

So, has anyone else got the full game yet? I've been playing it a bit today. It's about what I expected. I was a little skepticle about how well the game would work on a portable but it plays really well and I haven't had any major issues so far. I'm finding most of the newcomers take a bit of getting used to but I'm really liking Little Mac and Pac-Man. The main new mode is Smash Run which I've played a few times but I'm not sure what to make of it. It seems like a better idea than Subspace Emissary but it just seems a bit awkward, confusing and not that much fun. I've only played it in single player though and it seems like it could be more fun with human opponents. Online mostly seems to work quite well although I did have one match that was really laggy and I've only played For Fun mode so far. Overall I'm really enjoying it.
Top

I've got it too. It's OK for a handheld game, I guess, but you can tell they didn't put nearly as much TLC into it as they did with any other Smash Bros game. It's fun online, but there is definitely some noticeable lag.

Also, Esrever kind of got his wish, but it's a costume for Shulk in his skivvies instead.
Top

I would imagine a solid chunk of the dev time went into getting the game to run properly on a handheld at all. I feel bad that they had to squander so much effort on two whole games. Focusing on a single game like they usually do would've probably yielded better results overall.
Top

The real kicker is that the 3DS ver. is why Ice Climbers were axed (apparently Nana/Popo's AI were too much for the system). It's a damn shame too, considering how much variety they added, i.e., not animu.
Top

I'm a lot more used to the controls now and am enjoying myself a lot. However, has anyone played an online match that didn't have crippling lag? This is a pretty serious problem given the somewhat isolated nature of this version of the game.

Also I echo the sentiments above me that the game seems to be somewhat lacking in TLC. There's no opening cinematic, which for a series that has had marvelous presentation in the past, is a bit of a bummer. Also, this is the first game I've ever booted up and just didn't know what to do with myself. There's no real single player mode apart from classic, but even that mode doesn't seem particularly motivated.

It'll be interesting to see what the wiiu version is like and how much it makes up for the shortcomings of its little brother.
Top

SO HEY there was a new Nintendo Direct all about the Wii U version of the game. Lots of cool stuff going on there!

RUTABAGA YEAH! MEWTWO! Man, Mewtwo was my favorite Melee character; I could not consistently win matches against other competent players using higher tier characters with him, but it didn't matter because he was just fun! and when I managed to play a perfect fight and win.. so sweet the victory.
HOO-YAH!!
Top

I was pleasantly surprised. With Greninja around I thought Mewtwo would be seen as too redundant. It's good timing though - he's recently become a relevant Pokemon again. His two Mega forms have the highest attack base stat and special attack base stat in the game.
Top
Post Reply
122 posts