Speak your mind, or lack thereof. There may occasionally be on-topic discussions.
Post Reply
203 posts

Locit wrote:I'm pretty sure that's what they are! The turtlebots/dawsons are have a green/grey/yellow colorscheme, but pototsus also have that weird, flesh-colored face and arms, plus what looks like a nose.

Its Japanese name is "ポトス", lit. Potsu. Google-ing the kanji brings you to this wiki page, the English counterpart being on Epipremnum aureum.

So it's not based whatsoever on fauna but flora, this particular kind being a somewhat toxic variety that's used in decoration, presumably within pots hanging off of ceilings.

Okay, that's really neat. I've always liked the very few Badniks based off of plants - Bloominator has always been a favorite of mine - but it's harder to make expressive robots that way. It seems like Potosu took a lot of creative liberties from its inspiration to make it gel better with the aesthetics of the other enemies.
Top

Hey Doc, could I trouble you one more time? There's a video guide for this on youtube that claims to be playing the Gamecube version on an emulator (and the levels are definitely from SA2:B) but it DOES have at least some of the ones missing from Steam. Could you check out one more? In Green Forest, as soon as you get off the half pipe you start on, walk past the GUN bots and you'll see two orange mushrooms on the left (you can see them at 0:13 in the guide). They're definitely not in Steam, so either there's two versions of the Gamecube game or it's different than the PC port.
Top

Frieza2000 wrote:Hey Doc, could I trouble you one more time? There's a video guide for this on youtube that claims to be playing the Gamecube version on an emulator (and the levels are definitely from SA2:B) but it DOES have at least some of the ones missing from Steam. Could you check out one more? In Green Forest, as soon as you get off the half pipe you start on, walk past the GUN bots and you'll see two orange mushrooms on the left (you can see them at 0:13 in the guide). They're definitely not in Steam, so either there's two versions of the Gamecube game or it's different than the PC port.

I'm sorry, but I can't. I did that check for you during a weekend at home from school; I've since returned to campus, and I didn't bring the GCN version of the game with me.
Top

Wow, this was unexpected. There ARE two versions of the Gamecube game! This is a glitch that was in the Japan/NA release that apparently they noticed and quietly fixed because it's not in the PAL release, which came a few months later. I guess after 10 years nobody knew about it anymore, so when it got ported to Steam (and presumably PSN and XBLA) they used the NTSC version and reintroduced the glitch.

In the end, discounting the glitched ones, only two animals were moved from their Dreamcast locations for SA2:B (one in City Escape and in White Jungle). One in Pyramid cave had a torch dropped on top of it but you can still get it if you spindash into the torch at the right angle, and one in Cannon's Core was made invisible for some reason. But all are now accounted for.

Testing the PAL version I also noticed a really annoying glitch that I didn't get on any other version where the game thinks that you're in mid air while you're on the ground, so when you press jump you'll homing attack/hover/glide. It was usually in circular areas where the camera was pointed at the center, and all over the place in Cosmic Wall.

Also, the gunshot sound effect was removed from Shadow's flashback of Maria being killed in the Steam version, leaving you with no idea what's going on in the scene. It's still there in both the NTSC and PAL versions of the Gamecube release. But, to its credit, it put back all of the Big the Cat cameos both in the levels and the cutscenes.

Having uncovered these amazingly trivial factoids in a 13 year old game, I feel I've finally earned my wings as a Sonic Nerd. I'm going to go submit this to GameFAQs and take a long, hard look at my life.
Top

In the Codes section of the Sonic 3 and Sonic & Knuckles museum pages, the level select code description for the C button reads "pixel-by-pixel movement" instead of "frame-by-frame movement" like the Sonic 1 page. Also I'm pretty sure it's possible to do this in Sonic 2, but there's no mention of this in its museum page.
Top

So I've been wondering, why is it the "Battle Kukku" and not "Battle Cuckoo" (As in, an actual family of parasitic birds, of which, incidentally, the roadrunner belongs. [meep meep])? Was the original Japanese spelling a phonetic riff, and the (likely unaffiliated, uncredited fan) translator ran with, if at all noticed, it or what? It's spelled out in the former manner in Gem Collections menu (but not in the original US manual), so it's pretty much legitimized by this point, but it begs the question.
Top

I'm pretty sure more people know him for fans expressing a weird desire to see him come back in some form or another (he's even Kukku in the comics) than for his actual game appearance. Personally I think as a name "Battle Cuckoo" sounds completely ridiculous, so if you go with Kukku and get that certain foreignness in there you can at least push some of that embarrassment on Japan. Like we all know he's Cuckoo but we're kind of in denial about it.

Feels like arbitrary favoritism to me. I'd argue "Sonic the Hedgehog" only feels 'right' 'cause everyone's used to it.

Yes, I remembered that comic. Didn't think it was important enough to correct.
Top

I guess in the Utahraptor argument "Battle Kukku" is also correct. :)
Top

I think you mean "Yutaraputoru".
Top

So is this what chao are?

Unlike any other known animal, ordinary bdelloids routinely "import" pieces of DNA from their food and surroundings, capping their chromosomes with gene fragments from other animals, plants, fungi or even bacteria. These cross-kingdom genetic "patches" may continue to perform the same functions for the rotifer that they did for their original owners - sometimes involved in metabolic or immune defense processes, for instance - and will be passed on to all of the rotifer's cloned daughters. In a purely non technical sense, these creatures have evolved to "mate" with absolutely anything that has DNA; even a mold spore sucked into its grinding innards.


The swapping of genetic material is all part of a day’s activity for bacteria but it’s incredibly rare in animals. But bdelloids are bringing in external genes to an extent that’s completely unheard of in complex organisms. Each rotifer is a genetic mosaic, whose DNA spans almost all the major kingdoms of life.

So, yeah, bdelloids have been making the internet rounds for years now, but it had occurred to me that no-one has compared it to the modus operandi of Chao. Comparisons to Giger's Xenomorph have been made, yes, but not the harmless sim-pets.

I recall a member here pointing out that Chaos itself was modeled after the chaos amoeba, and being the mutant Chao it is, I don't think it's too unlikely they were both culled from the microverse.
Top

So is it just me but does the the song Nation Emblem March by Edwin Eugene (specifically 44 seconds in) sound a heckuva lot like parts of Carnival Night Zone (both acts).

Someone at Retro already pointed out that it samples Entry of the Gladiators by Julius Fucik. So it's kinda neat that it's a mash-up of two disparate songs (and doing a pretty blatant job of it)

I mean, they're very well-known songs, but most take them for so much granted without ever bothering to learn what they're titled. So: Neat?
Top

So I seem to recall there was something about Sega sponsoring a Formula One driver? Well I watched this marketing video that featured a driver, Damon Hill, with Sonic on his helmet and his (Sonic's) leg on the side of the car.

Also I'm so glad I found out Right Said Fred is a thing that happened. (LOL @ UK)
Top

Evidently there are a few blink-and-you-miss-it frames of Sonic sneezing in Sonic CD's intro. Weird.

Also it's long occurred to me that Sonic is wearing his post-3 gloves in the animations, but his pre-3 gloves in everything else CD-related.
Top

I always thought that was Sonic looking up at Little Planet and gasping in disbelief.

Man, that intro still looks good. Kinda weird seeing that version of Sonic (the CD animated one, not classic Sonic) after what's happened to the franchise recently!
Top

Wow, I still didn't see it. I went back to look at the Sega CD version, thinking the slower frame rate would jive with what I remembered (the same as Jingles) but there it's actually MORE obvious and easier to catch the "definitely sneezing" frames. What a weird time to sneeze!

Isn't this seconds after he stumbles through a lake like a moron and then acts like nothing happened? I always thought it was lampshading how Sonic tries to always look cool, even when things aren't going his way.
Top

How'd I never before never connect these crocs? 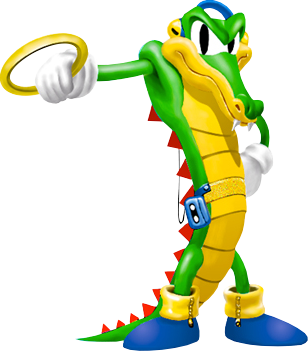 PBS weighs in on Mario vs Sonic.

Don't agree with much of what was said -- that Sonic is mostly jagged edges, when, especially in his classic incarnation, he's mostly circles, moreso than Mario. His distillation of their respective gamefeels is noteworthy, though, as he focuses on Generations which was more of a facsimile of when sonic was relevant.
Top

Sonic 1 is showcased and there's a lot of music from 06 and Sonic R used. At one point, Dreamcast offers to buy Sonic some naruto ramen, but he declines. Mega Drive calls him "silly". Eggman also appears, but is defeated when Sonic uses a muteki.
Top

I forgot one very important fact: Yuji Naka voices one of the main characters, and is portrayed as the "headmaster of SEGA". I thought that was a nice touch!
Top
Post Reply
203 posts