Page 53 of 85
by FlashTHD
IIRC, Kumatora got it. Including this, all of Lucas' specials are ripped off of Kumatora; he can't get any of them in Mother 3. Much like Ness.
by Isuka
This must be one of the most moronic updates ever, but there's something interesting to note; if you set the game to a 16:9 Widescreen aspect ratio, the upper and lower parts of the screen will get cut out, instead of the sides being cut off when playing in 4:3 Standard AR.

Apparently, anyone who isn't 1) blind and 2) a retard.
by James McGeachie
Not a single update has been "moronic", he's kept up updates every single weekday since the site launched and there'll still be tons of unknown material when the game is out, it's pretty damn impressive.

Anyway though this update confirmed Hip Tanaka has involvement with the game's soundtrack in some way, shape or form and although it may not be composition it's still cool news to me. In terms of simple, catchy melodies he was one of the truly great composers of the 8bit era.
by Esrever

That's probably the best way of doing things, if you're trying to make each version as equally workable as possible. But in a game like Smash Bros, where the camera is constantly zooming in and out, it probably doesn't make much difference anyhow... the camera position is always just set to whatever is necessary to fit everyone on screen.
by Oompa Star

I thought yesterday's update was really unnecessary. I could've sworn mapping control set-ups to user names was already revealed in a previous update.
by Sniffnoy

It was, but yesterday's update did reveal, firstly, the default control schemes, and, more importantly, that tap-up-to-jump will be disablable. Of course, you presumably won't be able to jump cancel if you do that, but if, lik me, you haven't learned to use that yet, really nice. Also that the Wiimote's motion-sensing will be used slightly in that you can turn on shake-to-smash.
by FlashTHD
If this grouching and grumbling about update quality keeps up, I move we put this megathread out of its' misery.
by Zeta
Yeah, I think Isuka is pretty much done, we've probably already seen like 66% of the game by this point.
by Shadow Hog
I dunno, I'd prefer to have it open, for when the BIG updates come rolling in every so often. You can just make some kind of rule where people aren't allowed to complain about the lack of updates.

In other news, Wario-Man? WTF? Where did THAT one come from? I'm guessing a <i>WarioWare</i> game but I can't figure out which one...
by Smilie
He's from Twisted! originally, I think. I can't think of a more awesome Final Smash.
by Isuka
viewtopic.php?p=81382#81382

And Wario-Man is one of the first non-lethal-looking FS I've seen so far, aside from Kirby's and Peach's... which doesn't mean that it won't be a total bitch when someone pulls it off.
by Yami CJMErl

Wario-Man is the final "character" to play in both WarioWare Twisted and WarioWare Touched. And I personally place this among my list of favorite Final Smashes (others being Super Sonic and Super Dragon Yoshi).
by Zeta
Yay! Event Matches are back. I loved those, but the last 20 were too damn hard, so I'm happy to see difficulty settings for these!
by Brazillian Cara
Altough it's pretty obvious they'll have bigger prizes for clearing them in the hardest setting.
So, any bets for friday's update? I think there's a chance it's either the language setting or Captain Falcon.
by Oompa Star
I'd like to see something along the lines of a "Lethal Marathon" style event match for Sonic, similar to the one they did for Captain Falcon in Melee. A 2 stock match between Sonic and Mario would be nice as well.

Falcon better show up. He is the most important and well known character in the F-Zero games.
by Isuka
Is there any other "representation" of the F-Zero franchise aside from Falcon and that stage? I don't think they'll just ignore it's existence in Brawl like that.
by Shadow Hog
Especially since his icon is already on the website.
by Oompa Star
Samarai Goroh is AT, so there is some representation in Brawl. He really should of been a playable character though.
by Locit
Oh get over it.
by Zeta
As long as he's not replaced by shitty Ryu.

Actually, there are a couple of other characters that still might show up as playable from F-Zero, like Jody Summers or Pico.
by Esrever
I'm still trying to get my head around the differences between the widescreen and fullscreen modes. The game's dynamic zooming camera kind of makes the whole issue a little weird. 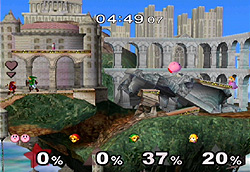 I mean, right?
by DackAttac
I can assume the same principle applies, and widescreeners will sacrifice some height. But yeah, this is kind of made interesting by the fact that there may be a crate on a ledge that I couldn't see on my widescreen but the person I'm playing online can see on his 4:3.
by Team Mecha

I was thinking Warioman on the bike for that myself.
by Shadow Hog

Funny you should post an image of that stage; Sakurai just confirmed its return. With new music and everything. And other <i>Melee</i> stages, too (but this was the only one explicitly named).
by Zeta
Oh sweet! Hyrule Temple is back. If I had a choice of what stage from each franchise to bring back, it'd probably be: